We arrived into Bilbao-Abando train station from Leon, a few hours into the opening of the biggest festival of the year, The Aste Nagusia, there were thousands of party goers all trying to either get in or out of the train station, and there was us trying to wheel our luggage through, it was pouring down outside which didn’t help matters, we finally got outside, found the taxi rank and waited, after what felt like an age a taxi showed only to tell us he wouldn’t take us because we had too much luggage 😦 after a little while we did manage to get a taxi to our apartment.

The Apartment was small, very modern and very clean, the host was there waiting for us with her little girl, her hubby helped us carry a bag up the 4 flights of stairs, we were shown around the apartment and given info on Bilbao.

We arrived quite late Spanish time around 9.30pm (Rayner time 7.30pm) we were pretty hungry so headed down to the metro and into the mayhem of party goers, we walked and walked but the only thing to eat was street food, burgers, baguettes etc

The streets were heaving, they were all lit up with different Spanish themes, show casing the Basque culture from wood chopping, basque dancers to face masks.  There were tents and stands for music and all sorts of events, it was massive and lots of fun, at 11pm fireworks lit the sky, this firework display went on for what felt like 30 mins and with all the surrounding buildings some of the fireworks were echoed and sounded like loud gun shots…Lucas walked around with his fingers in his ears…it was very loud, very pretty and really awesome that we were here for this festival.

I later found out that there is actually a firework competition and every night at 11pm there is a different display, made me wish we had watched the sunday nights display as well as that was the winner, we could hear it from our apartment but I guess thats not quite the same.. 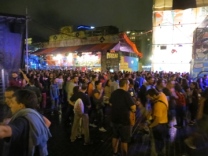 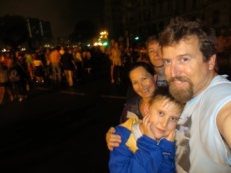 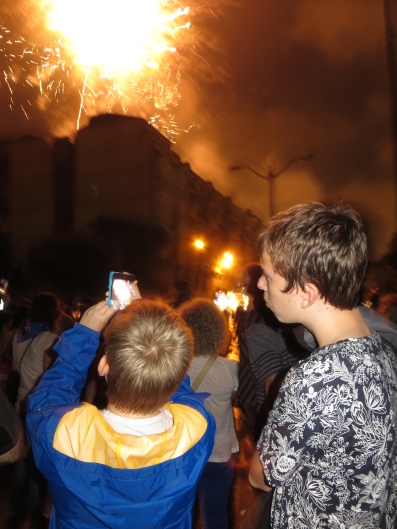 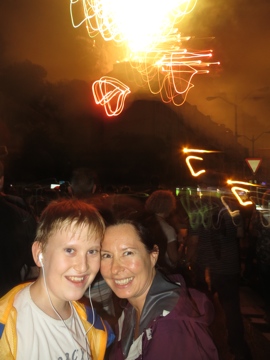 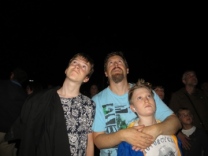 On the Sunday there is a parade of giants and the Gargantua, who devour the children who enter his mouth, inside the Gargantua is a slide and the children exit safely from his posterior, sadly for us we missed this part of the day while doing ‘The Room’ we had thought we’d make it back in time for the parade but when we got back it had just finished, I was so disappointed, we’ll see it next time..

We saw a balloon artist at the festival and he was just completing an Elvis balloon which was really good, he had a ‘menu’ of Balloons he could do for 1 to 3 Euro’s and Lucas chose a Dragon, which came out really well and we ended up leaving for our Hosts little girl to have. Lucas loved the cute little dragon and he also liked the idea of it making a little girl happy too.

At the end of the festival they apparently burn the mascot. They say that her hands are raised into the air as a sign of optimism and to symbolise dancing, it’s called the burning of the Marijaia.

Not sure what the old town is like when it’s a little less busy, but what we saw of it we loved busy and fun, what I really love is that every city has it’s look, it’s own feel, Bilbao has all the charming alleyways, houses and shops with their cute little balconey’s, there are plenty of bustling cafe’s with seats and tables outside, and lots of bars/pubs with people spilling out onto the streets.

I loved the Ría de Bilbao River, it really is the centre attraction, the bridges give you amazing photos of the rest of the city, looking up into the hills, there was a fair ground going on as probably part of the festival, the lit up Ferris Wheel stood out, especially at night.  It was all really pretty, the back drop is impressive the whole feel is atmospheric. 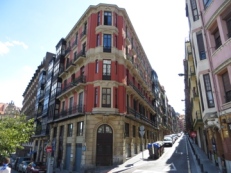 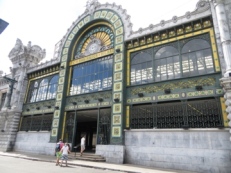 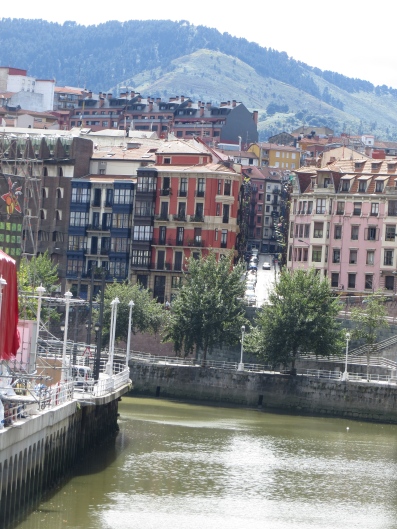 We walked around heaps and tried to take in as much as we could in our short 3 night, 2 day stay here, it was enough to make us know that we will definitely be back to see more. 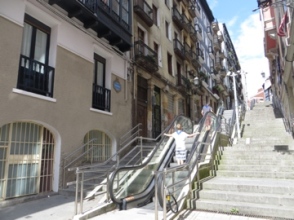 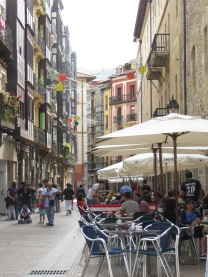 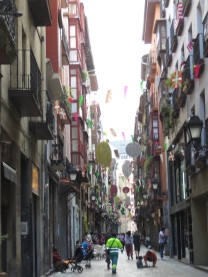 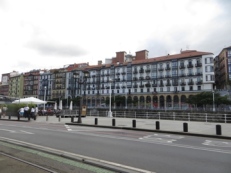 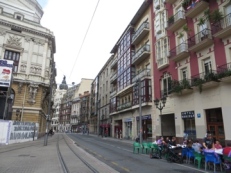 We had a wander up to the fair ground, it’s a lot of steps, (Note there is a lift in the Metro station that takes you pretty much to the top, we used it to get down :P), we went up mainly to see the Ferris Wheel, none of us are great fans of being put on spin cycle by the crazy fairground rides, Jake wasn’t feeling well if he had been I’m sure the bumper cars would have caught his attention.

It looked really pretty with the Sun beginning to set and we knew it would have amazing views, we didn’t have to queue for too long and we timed it just right, just got on as the sun was setting, a ferris wheel is always nice and relaxing and we did get some pretty awesome photos. 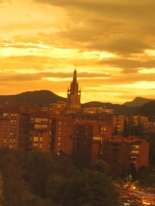 I did look up for us to do an Escape room, I had heard about these from friends who did one in London, mentioned it to the boys and they were really keen.

We took down the address and went in search for The Room, when we got there they had a spot free right there and then, so we went for it….I would so recommend an Escape Room, look up on trip advisor look at the reviews as there are a lot, but we picked `The Room’ , the man running it was really sweet and really made it good fun, a bit of family bonding (most of the time).

Once in the room you have a set time to find the objective (a priceless painting in our case) and then you have to escape the room as you’re locked in, there are puzzles to solve left and right and often the clue you found wont help until 3 or 4 puzzles later, at first you’re scurrying around trying to find any and all puzzles, then you become more and more focussed, but just as you start to make progress the countdown starts to add pressure, we didn’t make it, we had thought we were very close but when we opened the last safe we discovered we’d have had another puzzle to solve, so the police arrived and we were arrested in somebody else’s flat and in possession of the stolen painting. 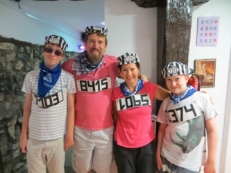 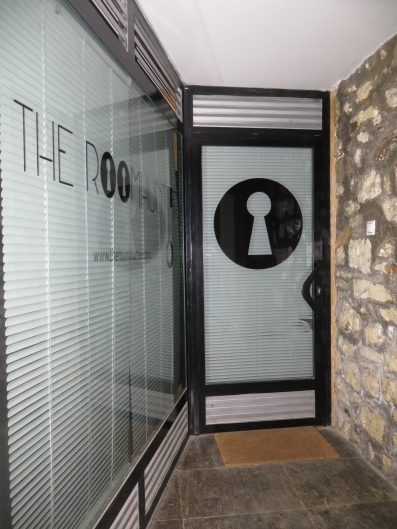 Boys are keen to do this again, the price was 50Euros per group, I thought this price was pretty good compared to London’s Escape rooms that cost around 18pounds or more per person.

The Funicular is Bilbao’s cable car, it’s a part of the cities public transport and is priced accordingly, so no tourist inflated charge here. It’s hidden away in a back block away from the river and could easily be missed, but is worth finding as the view at the top in awesome, we were even looking down at the hilltop Ferris Wheel we had ridden on the day before. 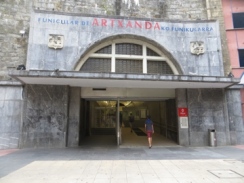 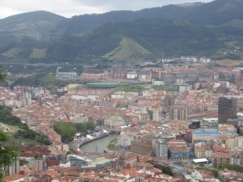 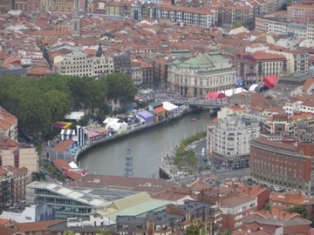 Our Apartment was up a couple of flights of stairs, after a long bus trip and tiresome journey, stairs are not always welcomed especially with all our luggage, but once in the apartment was gorgeous, really modern, very clean, had everything we could need, although being only there for 3 nights we decided we wouldn’t be cooking.  The metro was 2 mins up the road and the trip into the main part of town took about 5 mins, there was a shopping centre at the end of the road, location was great.  Our hosts were very friendly and welcoming.  We did find that most of Bilbao was expensive, probably because of the festival? but we would still love to come back and see more.

We didn’t save a lot of money staying in northern Spain, all accommodation is a lot more expensive than southern Spain, but it’s all beautiful and worth seeing, Bilbao we didn’t cook at home at all, we ate out every night and it ended up not being very healthy either.  So we made a deal that for the entire month that we are in Omis Croatia we will eat totally healthy `No treats at all..lets see how we go 🙂

One thought on “Bilbao” 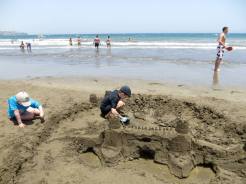 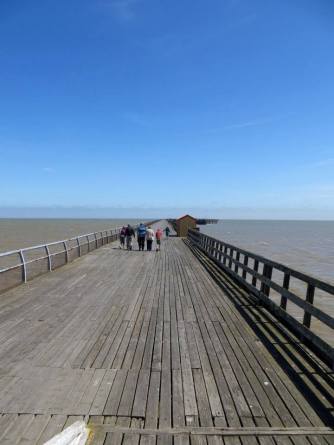 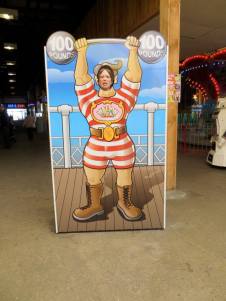 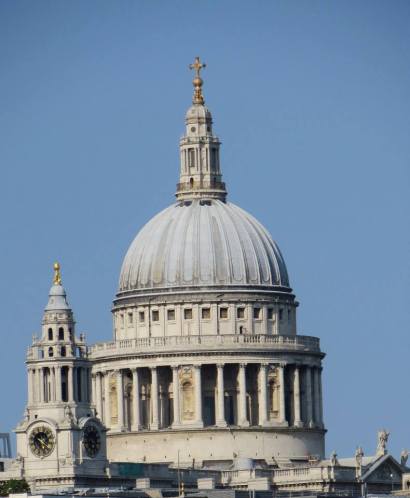